If someone were to ask me to define myself I would most certainly call myself a cyclist, I would ride all day if I could. By no means would I ever call myself a runner. Runners love running. Even if a runner moans and groans about the process of going to run, they get out there and love the actual running. I moan and I groan getting ready to go and the whole while I am doing it. This is in stark contrast to the clarity and freedom I feel in my mind while I am riding (even in the toughest of conditions). I had always thought about doing a Tough Mudder but once I fell in love with cycling that thought pretty much faded away. Besides… the thought of adding military style obstacles throughout a 10-12 mile run made the idea that much less appealing as well.

The opportunity, however, resurfaced when my brother convinced me to do one with him as his Christmas present and I was sure that I would be a “one and done” type of mudder. I wanted to have the experience with my brother because, despite our individual athletic endeavors/accomplishments, we had never done any sort of event together. Despite my hesitation about getting electrocuted, being covered in mud, jumping into ice war, and getting tear gassed I was very excited to finally be able to cross Tough Mudder off my to-do list.

The day arrived and it seemed like every single thing that could go wrong was going wrong. We were late leaving our hotel, got caught in a horrendous traffic jam, and everyone was on edge. We finally made it to the event location in Doswell, VA and my anxiety was through the roof. I was worried that I hadn’t trained enough, that I would let my brother down, that I would get injured, and about a whole host of other nonsensical things. The atmosphere, however, was electric. There were teams of people everywhere seemingly working to psych themselves up for their impending mission. It seemed like everyone was also trying to act really confident and “better” than the next person walking by. It actually became kind of humorous which helped to lessen the anxiety I was feeling. 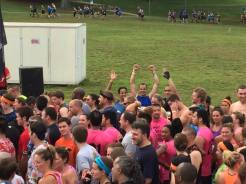 We quickly located the rest of my brother’s friends whom were a part of the ‘For Great Justice’ team, put all our final preparations in place, and got all the registration stuff completed. We had missed our original start time so we started with the 9:15am wave. My parents, my kids, my pregnant sister-in-law, and the significant others of the other team members all registered as spectators and were able to follow along on some of the course to watch us complete the obstacles. 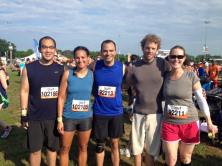 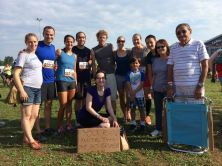 The experience in itself was a truly amazing one that emphasized teamwork rather than individual strength. And this wasn’t just teamwork amongst your own team members but across every team line there was. Everyone taking part in the event wanted to help you and see you succeed, whether it was during the log carry or getting over a wall or swinging on a rope, or whatever really. There were no teams on the course, only friends. Friends you never knew you had but friends nonetheless. It is a truly humbling feeling to know that you can ask any one of those hundreds of people for help and they wouldn’t hesitate to give it. I am not sure that I have ever been part of such a thing. The running sucked but that didn’t even seem to matter because once we did the first obstacle, I knew I would do another Tough Mudder and that I would be perfectly fine getting through this one. 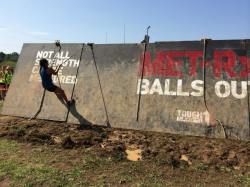 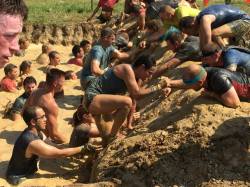 I don’t feel the need to describe every obstacle that we faced because they were all hard whether physically or psychologically. There were some that I wished I would’ve done better that still haunt me when I think about them and others that I aced. I am very proud of the fact that I attempted every single obstacle placed in front of me even the tear gas, ice water bath, and electrocution. I can honestly say that I loved every last one of them too which probably makes me sound a tad bit crazy. Truth is, we all have a little crazy in us, I like to think of my crazy as the good kind though. 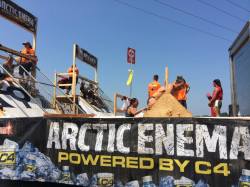 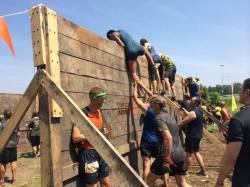 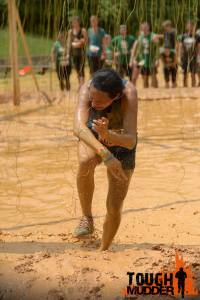 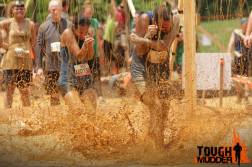 It was amazing to have my kids and my parents there to witness us go through the grueling course. I feel like my kids look at me differently now, with a stronger sense of pride at who their mother is. They have heard me talk about races and bike rides but they never actually witnessed me do one. And, of all the things that I have completed, this was definitely the one that probably looked the toughest. It was pretty amazing to get to hug them as I crossed the finish line and be able to see the pride in their faces. It was also fun having to sit in the car with them while they went on and on about wanting to do one themselves and how they made me promise to do one with them when they turn 16. And, promise I did. I will be way older but I will gladly do it with them and we will love every minute of it. 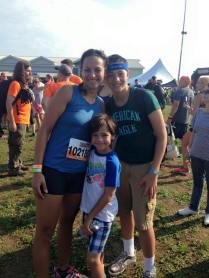 I also feel as if my brother and I became closer in what we dubbed as the #SiblingToughMudder. Something indescribable happened as we suffered through the heat and struggled, pushed through, and overcame all the obstacles placed before us. It is not something that I can even find the words to describe but I know it is there and so does he. We finished something amazing together and no one can take that experience away from us. 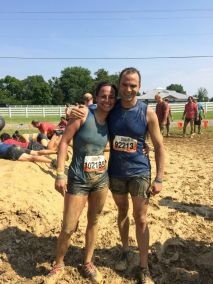 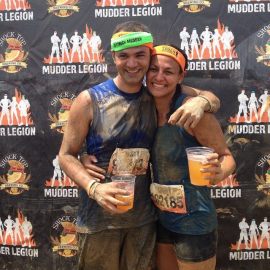 So… while I would still define myself first and foremost as a cyclist, I think I can safely add Tough Mudder to that definition as well. Besides, I am already the proud owner of a ticket for the Central Florida Tough Mudder on November 7, 2015. I’m gonna be a Legionnaire after all!! I truly am a masochist and a glutton for punishment.

12 thoughts on “I am one Tough Mudder”